We first met the song when we got an mp3 and the lyrics from the band- carefully written on a piece of paper. 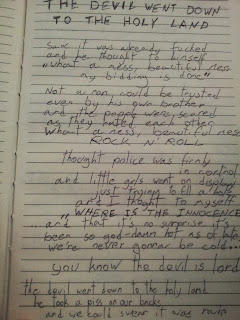 Well, reading the lyrics we knew the video has to be fast, violent, and fun (for the devil, to all others, not so much).
The concept was simple: a fun evening in hell with the devil chilling with his hobby.
The challenge now was to figure out what the devil  does when he wants to relax.
This is what we came up with: 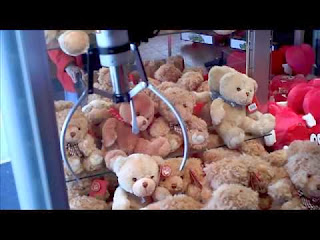 Well, what can be more fun or relaxing than a "bear grabbing arcade machine" from hell? Or whatever it's called. What does it look like? What are the rules of the game? We took some references from some twisted s#@t we found over the net, and in the end we stuck with this Hieronymus Bosh painting, called (literally) "Hell 2": 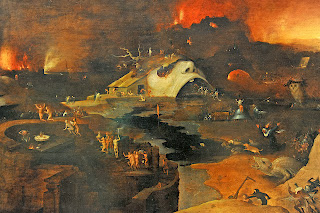 We mixed it all together, and came up with a first concept, that you can see below: 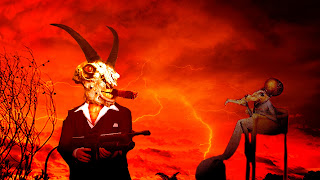 It's just some images roughly put together in Photoshop, but it helped us get the general feeling of it.

Having in mind the space, budget and technical limitations we planned to shoot the whole thing in green screen, and compose the footage with live action footage and still photographs. To see if everything works as a whole, we built the devil puppet (i will elaborate on it in another post) and did a "general rehearsal".

This rehearsal had to test the puppet abilities, the green screen setup, the integration with live footage and the muzzle fire compositing:

This is the first test we did:

The look was convincing. The green screen worked as a charm and it didn't take five hours to do. for us, nothing could be better. The band gave us a green light and now we would have to keep our promise of making a full stop motion video, with a bunch of bears, killer live scorpions, demon's hands, gates to heaven, explosions and mutilations.

In the next post i will talk about the puppet building process, and how we made the devil do it. feel free to ask questions on any of the things shown here, or on things you are curious about and want me to answer or elaborate on.

Posted by ZAZ animation at 9:18 AM

Email ThisBlogThis!Share to TwitterShare to FacebookShare to Pinterest
Labels: animation, Betzefer, concept, making of, stop motion, the devil went down to the holy land, zaz animation