Well, and now for the sets.
The biggest challenge in building the sets was to give a good foundation for all the green screen and matte painting work that followed in each and every one of the shots. We only built small parts of "hell", knowing that the sky, mountains, and sometimes the other characters were to be added later.
As with the devil, we used found objects from scrapyards, old trees and other strange stuff laying in the backyard. These objects aesthetics would be the foundation of the gritty look we were looking for, and the inspiration for all the digital work we did afterwards.
Here are some examples of stuff we used, and first the sexier ones:


and now for raw materials:


From these objects we just started to try things out, to see what works. lots of designs were a thing of trial and error, but things happen to fall to place, and find a good way to fit.

As building materials we had tons of hot glue gun sticks, old junk and a lot of gypsum. We used it to give the textures of the ground, as seen here 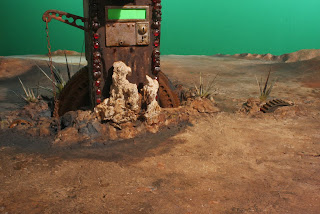 The gypsum is modeled and textured by hand, and colored with acrylics and other organic pigments like coffee, cinnamon and cardamon. It sure smelled good building it.... 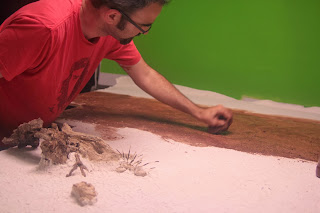 Actually that's it. the same ideas and techniques were used throughout the hole production, in order to keep continuity and style.
Next post i am going to show some examples of the different animation setups we had to deal with, including a suffering vocalist, falling bears and a summary execution.
keep posted. as always, questions are more than welcome.